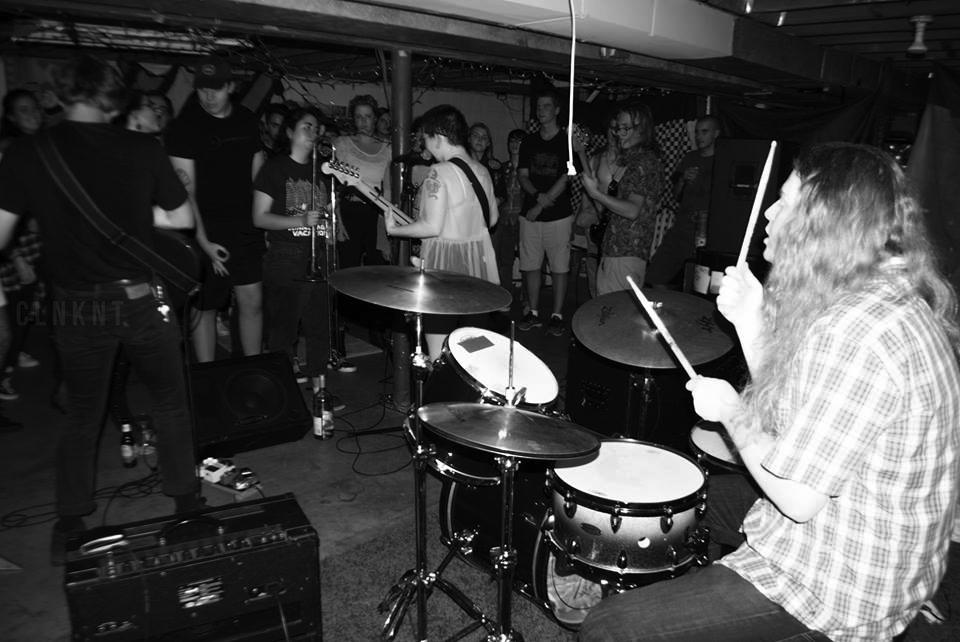 In the span of fifteen months, Driver’s Ed quickly became a staple in the growing DE punk scene. The band was one of several that showed a scene increasingly centered around Newark, the college town in the area. The four piece originally began when Allison George (guitar, vocals) began writing songs with Ryan Geary (guitar), eventually adding Nic Pirhalla (bass) to a loosely-formed band without a drummer. When Liam Warren agreed to throw the band onto a show at Allison’s behest, it left the band scrambling to find someone on drums. Eventually they conscripted Mitchell Bollinger, a veteran of the scene, to fill out the line-up.

Over the course of only a handful of shows, Driver’s Ed was able to capture the hearts of many showgoers, with Allison’s honest and brutalist lyrics and Ryan’s technical skill as a guitarist striking a chord with many of the scene’s younger audiences. Indeed, most of the scene included high schoolers and college students. The band’s quick humor caught on with the attendees, leading to cooing and crying out to the band in between songs, truly breaking down the barrier between band and audience that is all too often present, even within punk/DIY circles.

The band recorded several songs for a planned EP, initially set to be released via Slightly Shaken Records. Shortly thereafter, the band went on a brief week-long tour, highlighting many small-but-present fractures in the band’s close-knit friend group and resulted in a sudden reconsideration of the band’s trajectory. However, after a line-up change, with Liam Warren replacing Ryan on guitar, and Allison’s move into a new showhouse in the area, as well as some new material being written, the band seemed ready to take on the challenges of being a touring band.

But after months of inactivity due to various factors, not to mention the stresses of student life, and with Allison set to leave on a trip to Europe, it seemed unclear what the group planned to do with their increasingly overdue record release. Eventually, with Liam’s assistance, the EP that had been all but shelved is set to be released on Impetus on March 5, 2019.